welcome to Potestas essendi, a website in which you might find what you were looking for, if you were indeed looking for some information on curious stuff which is primarily – but not necessarily – related to Premodern times. I won’t trouble you with an accurate description of what you will find while browsing the website – I’ll leave the “pleasure of discovery” almost completely intact to you. Let me just point a couple of things out, starting with the reasons behind the pages you are reading.

This website is the outcome of my attempt at answering two enveloping questions: What is the role of academic knowledge, if it is not freely accessible? What is the usefulness of academic research, if it is constrained within the walls of scholarly circles and scientific publishers? While addressing these and similar questions, I committed myself to make the outcomes of my research accessible to the widest public through this website.

If you are here in search of knights and monks, magic devices and religious secrets, you will be disappointed. If you are here looking for more data through which substantiate a comparison between our complicated time and a Premodern age made of iron, superstition, and blood, you will hopefully find unexpected material through which rethink your suppositions on the Middle Ages.

It is indeed my hope that the multimedia contents which I made available in this website will change something in the often unfair (mis)conceptions concerning the Middle Ages, providing you with some glimpses of intriguing Premodern developments in both philosophy and science. Far from being an age of darkness and naivety, those centuries were characterised by a unique cultural richness made of a variety of approaches and ideas, doubts and innovations. It was an age of possibilities – in philosophy and science, literature and religion, theories and practices – along which a massive number of new ideas was elaborated.

Some of those ideas disappeared soon after, others were accepted and further developed. Some of them made it out of the Middle Ages and are still part of our shared cultural framework, while other ideas entered the “mythical” narrative of what the Middle Ages supposedly were and what they could not have been. This richness of ideas, sometimes bizarre, sometimes outstandingly modern, is the sometimes neglected cultural heritage of our societies. A heritage that should be rediscovered and critically appreciated, as its richness could still offer a wide range of approaches, strategies, and solutions to consider while addressing the self-questioning of our societies in a globalised world.

As you can imagine, you are going to find here contents of different nature and scope. As I worked for some years on cross-cultural pollination, a great part of the material in this website addresses the question of how Islamicate knowledge had been seized by Latin thinkers in the twelfth century. What problems were they willing to resolve? What aspects of Arabic physics and metaphysics were they interested most? These questions are focused on one thinker in particular, Dominicus Gundissalinus. Living in Toledo in the second half of the twelfth century, Gundissalinus was a translator from the Arabic, but also the first Latin philosopher discussing and eagerly accepting the revolutionary doctrines elaborated by Islamicate philosophers like Avicenna, al-Farabi, and Ibn Gabirol. His pioneering philosophical reflection makes him an invaluable case to understand the phenomenon of cross-cultural transfer of knowledge as well as the Aristotelian turning point that marked medieval philosophy and science at the beginning of the thirteenth century.

Another conspicuous part of the contents of this website are dedicated to a particular aspect of medieval philosophy. It is the tension between metaphysics and physics. A philosophical examination is (almost) always an analysis of tensions between assumptions, outcomes, and consequences. It is a de-construction of theories into their genetical sources and unspoken assumptions and implications. My most recent research is centred on how a structural tension between the metaphysical notion of prime matter and the physical concept of matter as materiality marked the evolution of philosophy (and science) throughout the Middle Ages and the beginning of the Early-Modern Period. My aim is to understand how the theoretical surplus implied by both the metaphysical and the physical notions of matter gradually made them doctrinally incommensurable and paved the road for a bifurcation of natural philosophy into a philosophical and a scientific tradition in the seventeenth century.

I know what you are probably thinking. I lied when I wrote that I was not going to describe the contents of this website. But I won’t say anything else, I promise. Let me just tell you that I would be excited to answer any question you might possibly have. Feel free, thus, to write to me about any topic related to my research, and I will be delighted to answer your questions adding more doubts and questions to them.

Isn’t philosophy, eventually, the art of problematising what is apparently simple and making simple what has been problematised? 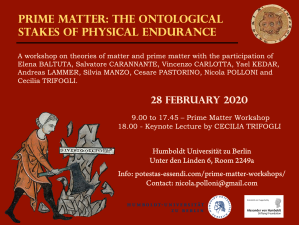