A Matter of Problems

Matter is a fundamental yet troublesome notion in philosophy, science, art. Historically, its problematic nature arises with the difficult accounts of matter given by Plato and Aristotle. Doctrinally, the difficulties fraughting this notion have originated manifold problematic tensions within a wide number of disciplines, descriptions, and theories. My research focuses on one of these central tensions whose effects have impacted on diverse areas of philosophical and scientific study in Premodern times. It is the tension between a metaphysical description of an unqualified substrate of existence (“prime matter”) and a physical definition of matter as generic substance qualified by physical characteristics (dimension, persistence, internal structure, etc.—which can be grouped together into the “materiality of matter”).

Within Premodern (and often Early-Modern) Aristotle-based systems of natural philosophy, the prime matter/materiality (pm/m) tension is expressed through a multitude of often irresolvable problems in ontology, epistemology, and practices related to matter. They are originated from the duality of plans–metaphysical and physical–through which matter is discussed. Three disciplines and approaches engaging with three different objects they call “matter”: a physical matter studied in natural philosophy, an alchemical matter engaged with by alchemical practitioners, and the prime matter of metaphysicians on which both physical and alchemical epistemes of matter were grounded.

Prime matter is therefore an invaluable key to understanding Premodern matter-theories (and practices). Their theoretical justification is provided by prime matter and its interrelation with form/s. Nevertheless, it shall be argued, has the doctrinal pollination been univocal (metaphysics to physics/alchemy) or bi-univocal (metaphysics to physics/alchemy and physics/alchemy to metaphysics)? In other words, have observations of the natural world and practices related to material transformation impacted on the gradual reshaping of and detachment from the metaphysical conundrum of prime matter? My long-term research addresses these and other related questions on the pm/m tension and its manifold yet obscure influence in Premodern philosophy and science.

What prime matter is

Prime matter has no definition. While there are definitions any of the substances playing the role of “secondary matters” (the specified matter of an object, for instance, the glass of a window or the gold of a ring), prime matter does not have one. And it cannot have one for two reasons. Prime matter is a metaphysical principle, and principles do not have definitions. Moreover, definitions are expressed by the essence of the considered entity and essence is related to the form, either as equivalent or as function. Accordingly, prime matter, which has no form and is a principle, does not have a definition. But it appears to have an essence.

What is matter, then? Premodern thinkers agreed in ascribing to matter a few borderline characteristics. While some of them were controversial or typical of just a few thinkers, a shared notion of prime matter implied that it is (a.) something other than form, and (b.) the substrate of forms, i.e., the stuff to which forms are joined originating corporeal (and in some cases incorporeal) things. As matter is what is other than form, (c.) matter has no qualification (which are expressed by forms) or an actual existence per se (a prerogative of forms and usually God). Therefore, (d.) matter is per se always in potency (but can be actualised within the compound through its union with a form). While debated, its (e.) communality to all corporeal things (all compounds are made of one matter specified by forms) also appears to imply a meaningful relationship with logical genus, which is the generality of at least two species (expressed by forms).

Accordingly, although there is no definition of prime matter, it can be said that prime matter is the common, unqualified, and potential substrate of formal existence within the hylomorphic compound. Matter, therefore, is a central element or aspect of the compound (i.e., any corporeal entity, at least).

From this position of matter as principle, fundamental problems arise from a metaphysical consideration of substance. Is prime matter a feature proper to corporeal things exclusively? Does prime matter contribute to the particularisation of the species into the individual, and how? What is the essence of prime matter? And what is the factor originating the passage from incorporeal to corporeal realms if prime matter cannot express the traits of materiality our understanding ascribes to matter?

What prime matter is not

Prime matter is other than secondary matter. The former is unqualified while the latter is necessarily qualified. This means that prime matter has no form while secondary matter has always some form, i.e., it is a hylomorphic compound. The consequence of this point is as clear as problematic. Focusing only on the simpler systems based on corporeal hylomorphism (with universal hylomorphism the situation is much more complicated), the ontological function of “corporealisation” (the emergence of those characteristics of extension, persistence, and internal structure referred to as “materiality”) is necessarily performed by form/s. How can a form, which is immaterial and incorporeal, be the origin of what is commonly said to be material and corporeal?

This is the central problem of the constitution of corporeal substance. How can the union of two incorporeal principles give something corporeal? This dramatic tension within plans of reality has seen generations of thinkers addressing it through diverse attempts. Possibly, the closest to our common understanding was the solution famously proposed by John Philoponus, who eventually neglected the existence of a prime unqualified matter in favour of a material matter for the bodies. Other solutions, equally famous, implied a role played by peculiar entities, like light, which extended matter at the origin of the universe, as Grosseteste claimed. Most common strategies relied on doctrines by Avicenna and Averroes: form of corporeality and undertermined dimensionality, respectively. In the long run, a negative approach similar to Philoponus’s would be the most influential in natural philosophy and natural history. While metaphysics and philosophy would differently engage the problem through Descartes, Spinoza, and Leibniz.

It would be a mistake, though, not to acknowledge how influential premodern discussions of this problem were in paving the road to the early-modern solutions to the conundrum of matter. Related questions on how extension and dimensionality arose from prime matter, as well as those concerning the internal structure of matter (continuous vs. discrete, i.e., atomism and corpuscularism) were indeed addressed meaningfully by premodern thinkers. An even bigger and most common mistake would be to neglect a consideration of how practices of matter and materiality impacted on both levels of the matter-problem: directly, on the structural characteristics of matter, and indirectly, on the role prime matter plays in the processes of material transformations.

How prime matter can be known

Prime matter’s unknowability is a crucial problem. Evidently, it is a breach in the intelligibility of the universe, a shadowy element within a natural world that, progressively, was intended to be subject to understandable (and therefore mathematisable) laws. Before the emergence of this systematising tendency, many Premodern thinkers perceived the relevance of this limitation in human understanding of nature. A limitation similar only to the human impossibility to know God per se. Since Calcidius, Premodern thinkers elaborated refined strategies to found at least some possibilities for a knowability of prime matter. The are the epistemological counterparts of the solutions to the pm/m process in natural philosophy. In both cases, the gradual emendation of the shared account of prime matter implied a progressive detachment from its basic metaphysical roots till the eventual superseding of the theory. Although often underestimated, the epistemological problem of matter is central for a positive understanding of the history of this controversial notion. 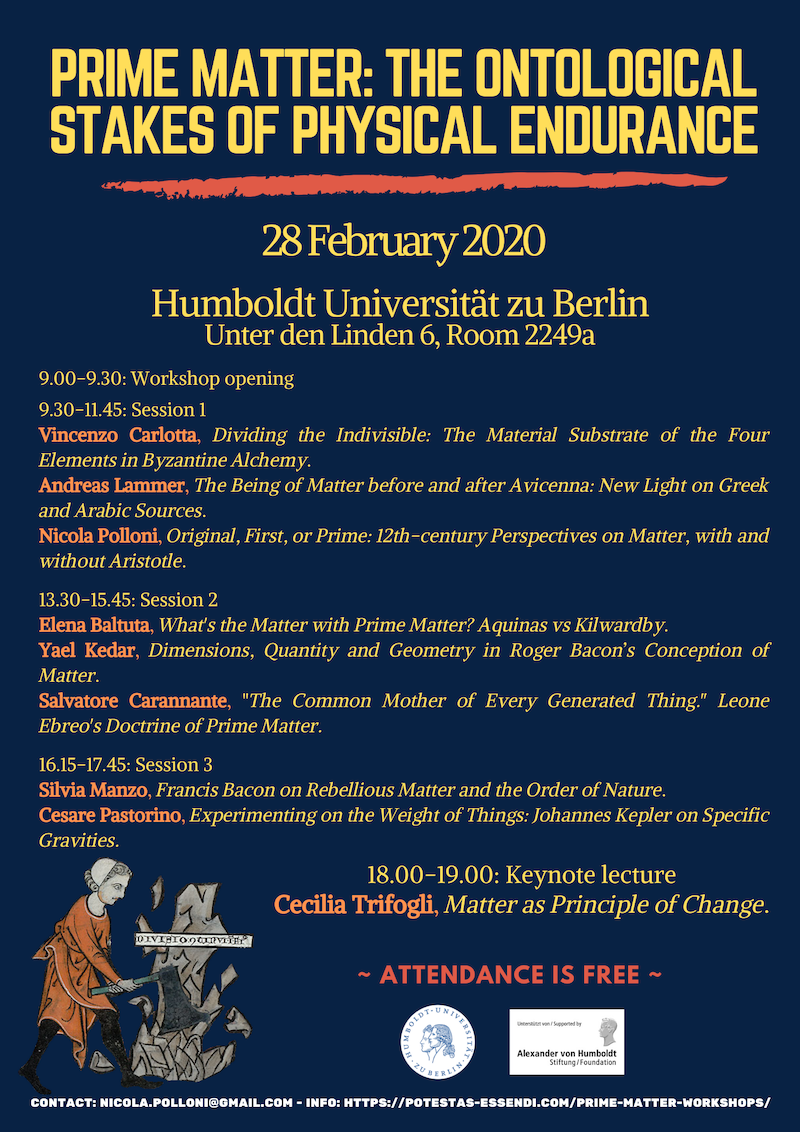