I’ll be giving a couple of talks in the US in October/November on Gundissalinus and the problems of cross-cultural exchanges of philosophical knowledge during the Middle Ages. Everyone is welcome!

Abstract: The early-medieval traditional articulation of knowledge was based on the division between trivium and quadrivium expounded, posited under the authority of authors like Boethius and Martianus Capella. The human knowledge, thus, found its development through the seven liberal arts­—grammar, rhetoric, dialectic, arithmetic, geometrics, music and astronomy. The seven liberal arts were accompanied, in the mind of any early-medieval scholar, by the twofold division of philosophy in theoretical and practical; and by the mechanical arts, from agriculture to architecture, to cynegetics and navigation, discussed by a vast number of classical and early-medieval sources, among which one has to remember at least Macrobius, Isidore of Seville, Augustine, Priscianus, and the Roman authorities such as Virgil’s and Vitruvius’s. Notwithstanding their undeniable bond with the classical (and pagan) authorities, in these medieval systems of knowledge there is no place for bizarre disciplines like astrology or divination, or demoniac arts like necromancy, while others were simply unknown, like science of gold-making that will be called alchimia. This situation will abruptly change in the second half of the twelfth century as a direct consequence of the translation movements from Arabic and Greek into Latin, a change of perspective that constitute the topic with which we are going to deal today. We will take into account two articulations of knowledge, the system proposed by Hugh of St Victor in his Didascalicon and that expounded by Gundissalinus in his De divisione philosophiae, pointing out how the scenario changes with the arrival of the ‘new’ sciences in the Latin West.

This talk is part of the Midwest Seminar in Ancient and Medieval Philosophy, and you can find more information on my contribution HERE.

Abstract: Together with two further, anonymous works,  the De causis primis et secundis and the Book on the Peregrinations of the Soul in the Afterlife, Gundissalinus’s writings mark the theoretical and even material path that will lead to the great receptions and criticisms of Avicenna and the other ‘Arabs’ in Paris and Oxford during the thirteenth century and beyond—from John Blund to Albert of Cologne, Thomas Aquinas, Roger Bacon, and Duns Scotus. Today we will try to cast some light on this very first stage of ‘theoretical appropriation’ of Avicenna’s doctrines in the Latin West.

11 November 2016 – Talk: Dominicus Gundissalinus and the Renovation of Medieval Philosophy, Colloquium: Translation and Philosophy:  Gundisallinus and Ibn Daud in 12th Century Spain, University of South Carolina, Columbia (SC). Abstract: Gundissalinus’s contribution is crucial and developed in a twofold way. On the one hand, indeed, the translating activity pursued by Gundissalinus and his participation to the ‘Avicenna project’ with Abraham Ibn Daud made available to the Latin public texts whose relevance is undeniable for the subsequent Aristotelization of medieval philosophy: and this is the case of Avicenna’s De anima and Liber de philosophia prima. But Gundissalinus’s choice to translate also peculiar writings like al-Kindi’s De radiis or Ibn Gabirol’s Fons vitae had permanent consequences on the reflections of many philosophers, like Grosseteste or Bacon. On the other hand, the second and even more important contribution by Gundissalinus is his original philosophical speculation as it is offered in the treatises he wrote. With those writings, Gundissalinus tried to fill the gap in the Latin philosophical framework in which he received his education, and thus, in the first place, Chartres. He tried to exceed the limits of the Timaic Platonism, criticising the doctrine of primordial chaos in a Gabirolian basis; refusing the theory of the demiurge following Avicenna’s doctrine of necessary being; revising the cosmological Platonism of Hermann of Carinthia’s De essentiis by putting them under a crypto-Aristotelian natural lens. The very same effort can be seen at work on Gundissalinus’s elaboration of a new articulation of science, the De divisione philosophiae, where he proposes a lay system of knowledge that could be able to integrate the new disciplines whose knowledge was made available thanks to the translation movement. And finally, a very similar scenario is provided by the consideration of his De anima, and his theoretical effort at assimilating the great news of the time, that is, Avicenna’s psychology.

And more to come

One thought on “Gundissalinus in the New World”

This site uses Akismet to reduce spam. Learn how your comment data is processed. 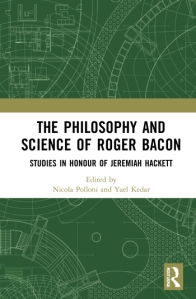 The Philosophy and Science of Roger
Bacon: Studies in Honour of Jeremiah Hackett 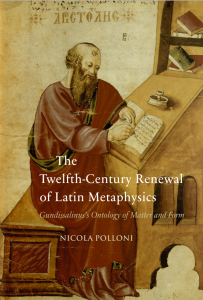 The Twelfth-Century Renewal of Latin Metaphysics